It was all over Twitter the other week, so I tried it. Me- the media-centric, math-disliking, non-scientific, non-techie, employee of STORServer. Last month, I coded.

The idea of coding always managed to stake some fear into my heart. My dad is in IT, and the man is smart. I also have a vivid memory of my big sister almost failing her C++ course in college and how she called my dad over many late nights to beg for help. She passed, but she also changed her major from engineering. (And yes, she is also incredibly smart). Code and IT were reserved for the geniuses. I never never thought I’d wind up working in IT but here I am today, celebrating my one-year anniversary at STORServer! However, even in the last year, I’ve managed to avoid extremely techie things. But a month ago, everything changed. Well, kind of.

I saw the idea for An Hour of Code splashed all over Twitter. As their website explains, “The Hour of Code is a global movement reaching tens of millions of students in 180+ countries. Anyone anywhere can organize an Hour of Code event. One-hour tutorials are available in over 30 languages. No experience needed. Ages 4 to 104.” So far, over 97 MILLION people have coded.

I wrote my first computer program, which allowed me to help Angry Birds squish some pigs. There are a bunch of games/programs, including this one. It did take about an hour, and it was actually quite enjoyable (although, I do love Angry Birds). 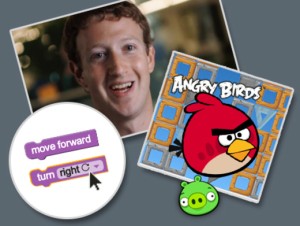 Code still freaks me out and I still struggle to figure out all of the steps between the start and finish regardless of how cute and colorful the program is. I found a more advanced Hour of Code program after finishing up the Angry Birds game and I was lost and frustrated almost instantly. A career in code is not in my future, and that’s fine. I am more amazed than ever by the brilliant IT people in my life, especially at STORServer.

STORServer began as a team that got together, wrote a new software program for data backup, and built the original backup appliance.  From the ground up, and with no predecessors in the market, they untangled the puzzle as the pioneers of backup appliances. It may not be as much fun to manage backup as it is to play Angry Birds, but STORServer does make it just as easy! And that is the ultimate peace of mind for any IT professional. Find out how STORServer provides you the ultimate backup solution today.

Did you also know that you could become a reseller of the world’s #1 backup appliance? Contact us to find out how!